There are times when you need want to hibernate in mac os just like on a windows pc you do, it could be the case when you want to save all opened windows and apps running and turn off mac os in such state so that you can resume the same state while restarting mac os again. 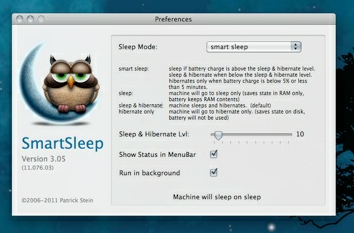 But before we tell you about how to hibernate in mac os, you should how sleep is different in case of mac os

There are different modes of sleeping in macbook and you will need to select the mode that will suit your requirement. The default sleep mode activated in Macbook or Macbook pro does make the hardware sleep it just shutdown the display screen but still the hardware keeps running and consuming the battery power.

After searching I found some software which could actually enable the hibernate feature on mac os, description and features of these softwares is mentioned below.

DeepSleep – It is a simple Dashboard widget which allows users to put their computer into hibernation mode, also sometimes called software suspendmode. This widget only works on a limited number of Apple computer models.

Another way to hibernate in mac os by using Terminal and some commands, but for this you will need to launch terminal app for this.

It is very easy to set the hibernate mode really all you do is in a terminal:

Another free software which could let you hibernate in mac os is called Hibernate – It allows you to Hibernate let’s you enable hibernation on your Mac.

The current memory is saved to disk whenever you put the Mac to sleep. When your battery/power is depleted the machine will boot off the saved image much quicker and you can restart where you left the machine.

Please Note: Hibernation is known to work only on newer Macs ( > 1.2 GHz ) and even then it MIGHT DESTROY YOUR MACHINE USE AT OWN RISK.