Some days back my father came up to me showing me a 32 GB pen drive which he got from a friend of him who wanted to sell this big size pen drive for 1000 Indian Rupees or 20 dollars. My father brought to me as I might be interested. Firstly I got interested to get this pen drive as this pen drive is looking like a real Kingston pen drive of 32 GB. 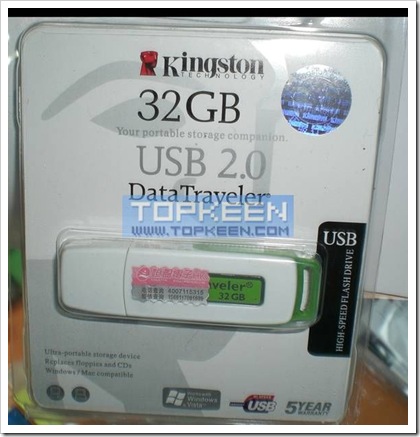 The deal for 32gb pen drive was sounding quite good to me, but i decided to inspect further and took a close look and found some thing suspicious with the build quality and then I plugged the pen drive in USB port on my laptop and checked the size in my computer it was showing approx 31 GB

Still I had some suspicion and decide to inspect the pen drive in device manager where the truth revealed that it was fake pen drive as it was showing no company name in manufacturer and it did not have any serial number also. This pen drive is another fake pen drive being invented at the local computer markets in India –  LOL 😀

So If you get any pen drive claiming it to be big size original pen drive – please examine the details of the drive by connecting it to computer and check it under device manager. Following are the problem you might face with a fake pen drive like this:

1. The data in the pendrive with get corrupted due to bad sectors most of the time.
2. On coping pictures only limited amount or 512MB of data will remain intact.
3. You cannot format the Pendrive.
4. Windows Disk Check utility will hand if made to run on the pendrive.

Let’s us know you are facing any other problem on a fake pendrive, we would love to help 🙂