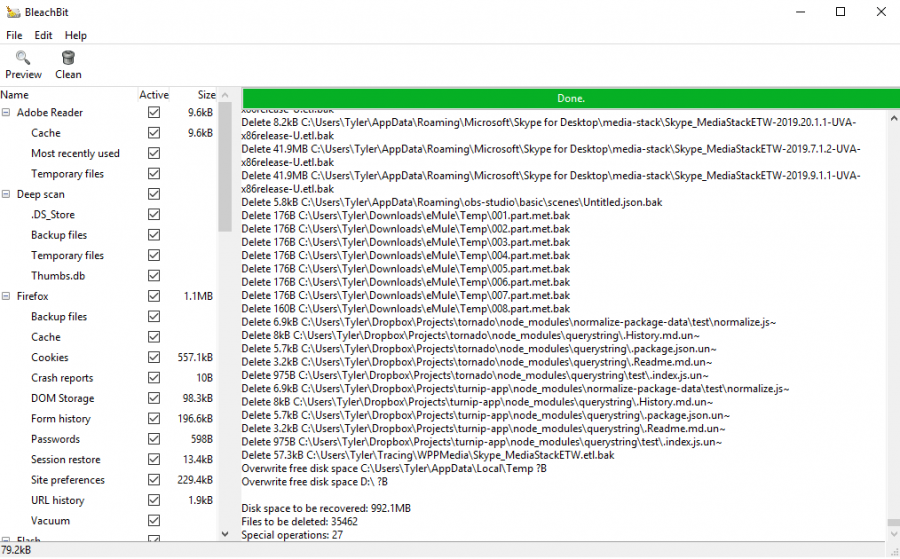 Bleachbit is a free and open source PC cleaner released in 2008. It’s famously known to be used by Hilary Clinton’s team during her presidential campaign.

Since Bleachbit is 100% free, how does it stack up to the competition? I took the time to play around with Bleachbit and its features so you can see what I think.

Let’s get right into it.

The answer to this question depends on what you expect from a PC cleaner like Bleachbit. If you are expecting it to speed up your computer, cleaning up files alone won’t achieve this. In fact, the only PC cleaner to actually speed up my computer was Iolo System Mechanic because of its many other features besides PC cleaning.

However, Bleachbit definitely cleans up unneeded files and privacy data effectively. It can also permanently delete files and folders so they can’t even be recovered by specialized software.

Bleachbit is 100% free and open source, so it doesn’t bring as many features to the table as competitors like CCleaner. However, it still has the essentials of a good PC cleaner.

This is the main feature of Bleachbit and probably what you’ll be using it for the most. You can selectively choose which types of files you want to get rid of, such as useless application files or your browser privacy data.

The main thing I like about this is the amount of control you have over what gets deleted. In several other PC cleaners, you can’t clean up files from specific applications, only system and privacy data.

One thing that could be improved though is the user friendliness of cleaning your PC with Bleachbit. For example, the log on the right can be confusing and overwhelming for some users. Also, it’s not clear what every option on the left means. Without looking it up, can you tell me what “Vacuum” under Firefox means, or “.DS_Store” under Deep scan?

On the other hand, this kind of detail is great for more experienced users. The log can tell you exactly what’s being deleted, and if you’re familiar with all the types of files, you have a lot of customization.

Bleachbit can permanently delete files and folders so they can never be recovered. It can also wipe your clipboard (what you use to copy+paste), and wipe your Bleachbit settings so no one can tell you’ve used Bleachbit. 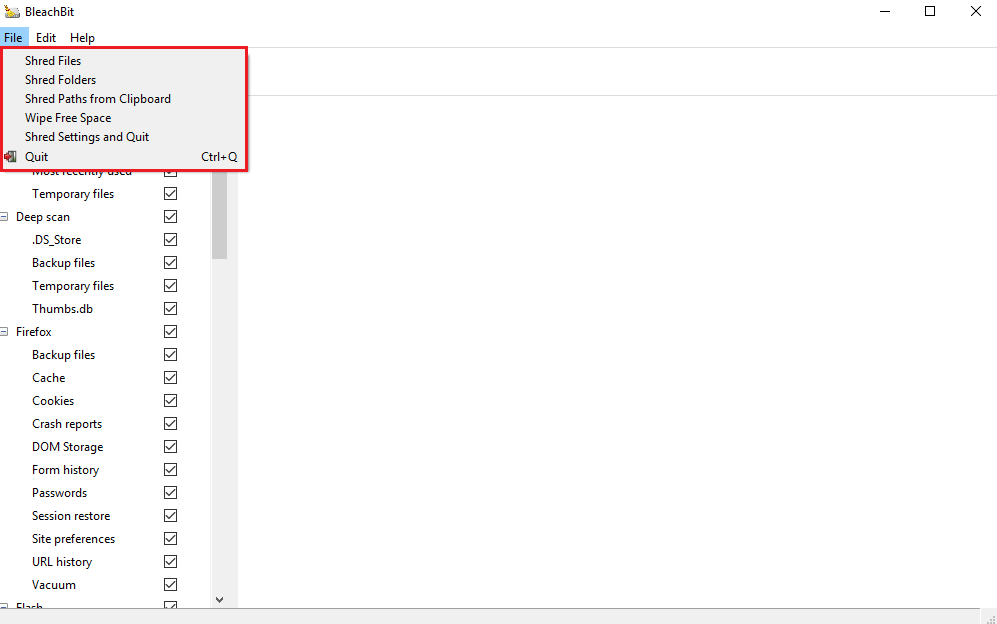 Did you know when you delete a file on your PC it can still be recovered? This is because the actual data is still there on your hard drive, and deleting a file only tells Windows “hey, you can overwrite this data on the hard disk with whatever you want, but for now I’ll just make it look like it’s gone to the user.”

However, shredding files and folders with Bleachbit also overwrites file data after deleting it, ensuring it’s gone forever. The “Wipe Free Space” feature is similar. The difference is that it only overwrites free space on a drive or folder so those deleted files can’t be recovered, and doesn’t delete existing files.

Along with shredding files and folders, you can also shred your computer clipboard. I think this is a pretty interesting feature that I haven’t seen in other PC cleaners. It makes sense that I don’t want people to see what I have most recently copied. However, you can easily do it yourself in Windows:

Finally, you can shred your Bleachbit settings and quit. This is like covering your tracks because without any file evidence (i.e. settings and log files), no one can tell you ran Bleachbit. This is especially true if you uninstall Bleachbit after using the “Shred Settings and Quit” tool.

Bleachbit has a good amount of options for a PC cleaner, although some of them aren’t very straightforward. 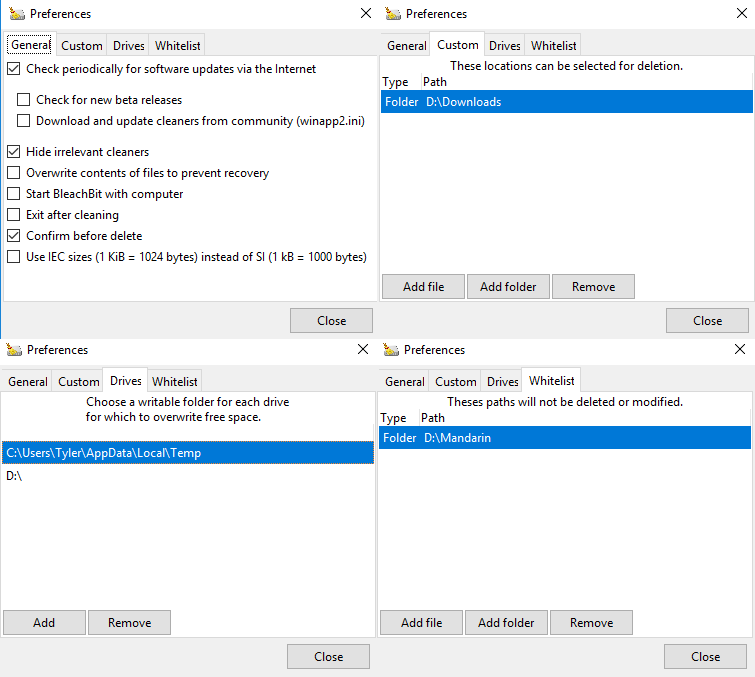 As you can see, you can do things like check for updates, ignore certain folders when cleaning, and add warnings to confirm you actually want to delete files. However, there are a few features I would have liked to see that a lot of other cleaners have:

In addition, some customization options are confusing. I’m still not completely sure what the “Drives” tab does, and why I would ever want to use IEC sizes instead of SI sizes. Some additional explanations or tooltips would help a lot here.

Maybe I’m asking too much of software that’s 100% free and open source.

Yes, Bleachbit is completely safe in the sense that it won’t put anything harmful on your computer such as malware. Also, the PC cleaner only deletes temporary, junk, and non-essential files. So it won’t delete anything important.

There are many other PC cleaners out there, such as:

If you’re looking for another free PC cleaner with more features and customization options, check out CCleaner or Glary Utilities.

If you’re looking for a PC cleaner that has a cleaner user interface and actually speeds up your computer, check out Iolo System Mechanic.

Overall, Bleachbit is a lightweight, effective PC cleaner. It’s perfect for a quick clean or if you need to wipe some files. I also think it’s impressive that a free and open source PC cleaner became this widely used.

That being said, I think other free cleaners like CCleaner do the job better since they have more features and customization options. If you’re willing to spend some money then you can achieve even better results with Iolo System Mechanic.

Check it out yourself, and let me know what you think.