While using your system, you may even not know that Windows lock some files while they are being used. As soon as it locks them, you can’t delete those files even if you want to do so. But, Windows does it for a good reason because if these files are not locked then there is a possibility that it may damage the file or harm the Operating System. Although simple files for the windows like videos or MP3s or other seemingly harmless files may be erased very easily. Sometimes when you try to delete the file, windows comes up with a message that access is denied, you can not delete the file the file as it is currently being used. However, you know that you are not using it and you just want it to delete.

So, now the question arises that what should we do in such cases and what is the best way to remove these unwanted files from your system? You may not know but there are some unidentifiable reasons, due to which these files are being used by system. One of the solution which almost all users opt is to reboot the system and then finally by closing down all the auto-initiated user instances they simply delete these files which were locked by the windows. But rebooting your system for deleting files in such cases is not at all a vital solution. So, for this you may use a newly launched tool called as Any File Remover, which can be used to solve your issues of deleting such files. 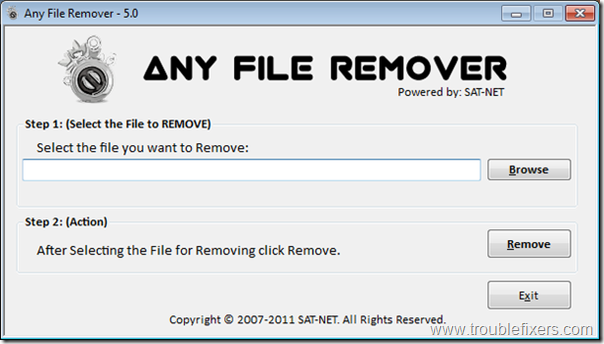 Any file Remover is a small, simple and yet powerful application which can solve your issue by forcefully removing such files which has been locked by the windows and are not being used by you. It comes up with a simple and user-friendly interface with only a single button which is used to simply delete the files selected by the user. In order to delete a file, you just have to give path by specifying that particular file which you want to be deleted permanently from your system. After selecting that file, you may simply click on Remove option that allows you to delete the file from your system permanently.

The only limitation in this tool that you may observe is that it doesn’t provide you an option into file context menu. So, in order to delete the file you can’t simply use the options available on the right click, rather each time for deleting the file you have to manually run this tool. One more thing that should be noted for this tool is that it doesn’t move the file to Recycle Bin after you delete it, rather it deletes the file completely from your system. So, you have to be careful enough before deleting that file as you can’t restore that file again once you have deleted it using Any File Remover.