I have been using windows 7 on my macbook pro for around 5 -6 months now, in dual boot configuration with Mac OS with the help of bootcamp which comes preinstalled in any every macbook pro in mac os. I never faced any issues in running windows 7 but recently I started facing a strange issue when macbook pro suddenly stopped hibernating and also did not enter sleeping mode when I tried several times.

It happened like I close the laptop and leave it for more than just a few minutes, when I open it back up, it does not awake immediately. I often end up having to press the power button just to get it to wake up. Sometimes this causes it to wake up in Windows mode, sometimes it reboots completely, sometimes the battery has been drained and Windows has to restart and gives the message that windows was not shutdown properly.

Once I started inspecting the issue, after searching a bit I came to know about other users facing the same problem who were running windows 7 on their macbook with bootcamp. When I went to apple support forums some of the people fixed this by resetting both PRAM and the nonvolatile RAM (NVRAM) of macbook pro. Hardware settings are stored in a thing called “parameter RAM” (PRAM) so some people solved by flushing these memory areas.

In order to reset the PRAM and RAM (NVRAM) you will need to press Command + alt or option key + P + R – all these keys at the same time – Hold the keys down until the computer restarts and you hear the startup sound for the second time and then release the keys.

For some macbook users this problem was due to WiFi adapter not allowing and waking up the computer when it tries to sleep or hibernate. In order to fix it in that case, go to Device Manager -> Network adapters -> “broadcom” device -> Properties -> Power management -> Uncheck “Allow device to wake computer from sleep” as shown in the image below. 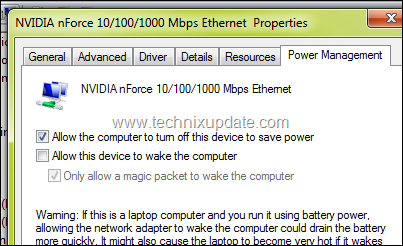 In my case it was a different case as none of the above solution worked for me, then I investigated the recent start up programs added to windows, after some hit and trail approach I came to know that dropbox app ruining in system tray in windows was causing this problem in hibernation and sleep with my macbook pro, some how it does not allow the machine to enter these modes when it was running. So I removed the application from running on system startup, you can read the tutorial here for more info. After finding the cause I always make sure that dropbox is not running when I hibernate or sleep my macbook pro.

Additional Tip: If this problem is occurring with you also, I would suggest to clean or delete all the temporary files using some program like ccleaner or some other temporary files cleaner.