There are times when you want to control a PC from another computer using the mouse and keyboard connected to another computer, you may be wondering if this can be done. Yes this can be easily done for free using some free softwares so you don’t have to pay anything. 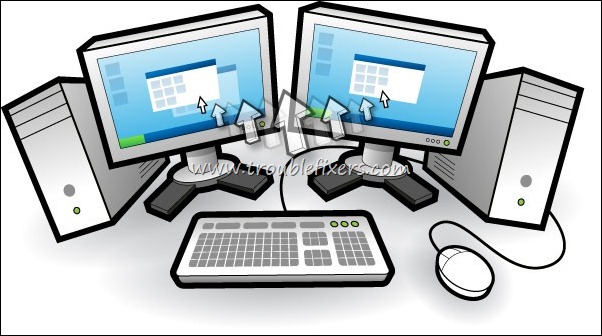 This is a basic scenario in which you actually need use one mouse and keyboard on two or more computers, there are many ways you can do this for free, after searching on web we found out many software that could help you do the same as well by default if you don’t want to use any software for this you can use the default remote desktop to do this, in case you cant do remote desktop to a windows machine.

Another way to remotely control a PC can be done by using teamviewer which is free remote desktop tool to control a computer remotely but for using this tool you will need to make sure that both the computer from which you want to control another computer and computer to be controlled should be connected to internet, teamviewer has unattended mode of connectivity so that you can control without any user input required on the computer to be controlled from other computer using a different mouse and keyboard.

Both of the above ways seem are slow ways as compared to one in which you use a software called Synergy which is again a free software which lets control another computer, Synergy is another free software that provides the ability to control two or more one keyboard and one mouse connected to any of the computer. But make sure that all these computers are connected to the same wifi network. Once you have installed Synergy software all the computers and configured them as server and client, you can move from one computer to the other by simply moving your mouse out of the computer screen.

Please Note: You will also need a separate monitor for every computer in this case but switching between computers will be as easy as moving the mouse in the right direction.

You will also need to configure which is computer in on the right or left only then the software will work for you. The computer which you to be controlled should looks like this in synergy settings as shown in the image below. 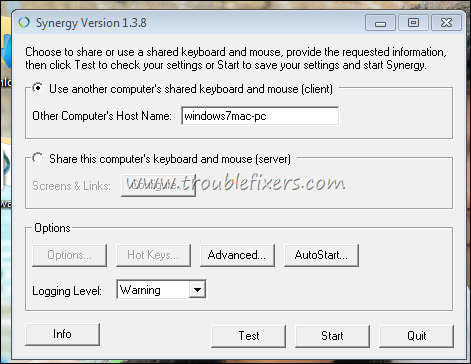 The computer which you will use to control the other should be configured as per the settings as it looks like in the image below. 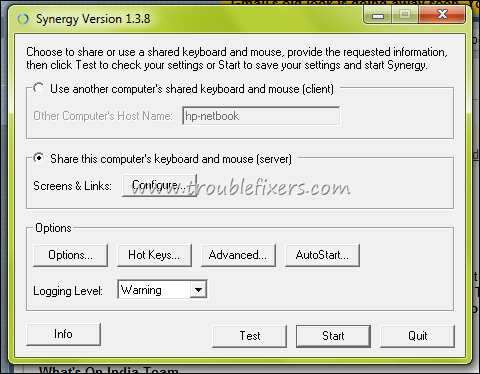 So the configure settings need to be done from the computer on which the computer keyboard and mouse are connected physically as shown in the image below. 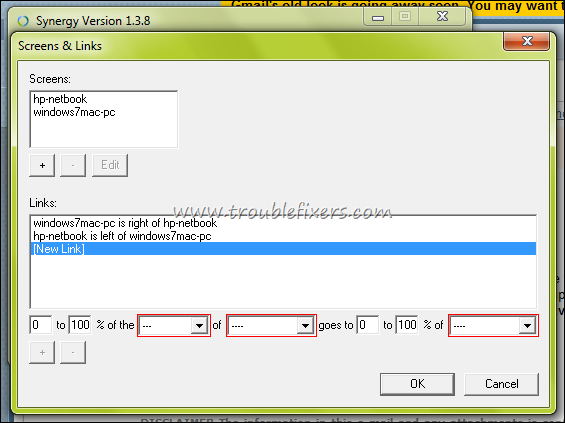 Here in the image above windows7mac-pc is my laptop from which I want to control another computer called hp-netbook which is connected to my tv in my case, so I control the netbook using synergy. The settings you see in the image above, you will need to create as per your own requirement, by clicking the + sign button you can add computers. In order to make this work, you will need to run synergy on both of the computers, click on start button under configuration settings on both the computers.

If you think synergy is too confusing for you to configure, then you can use another free software called Input Director which is a Windows application that lets you control multiple Windows systems using the keyboard/mouse attached to one computer. It is designed for folks who have two (or more) computers next to each other and find themselves regularly switching from one system to the other. With Input Director, you can share a single keyboard/mouse across a set of systems. You switch which system receives the input either by hotkey or by moving the cursor so that it transitions from one screen to the other (in a very similar fashion to a multi-monitor setup).