Facebook is the most popular social networking website in the world right now. In order to hold the position of the most popular social networking website you have to continuously come up with new features and functionalities to keep the interests of the user glued in. In the past also Facebook have come up with many new updates to its website to keep the site new and refreshing like the chat bar that was rolled out a few months back which was not liked by some users so it also had an option to hide itself. If you don’t like the new chat bar you can hide the new chat bar using the options available you.  But this time Facebook has come up with something new which is also called as a ticker.

The ticker will show you the latest updates from your friends depending upon the type of update you will get the required options about what all can you do with the update. When you will upload an image, your friends will be able to see the image automatically in their tickers as well as the comments box and similarly you will be shown the comments box for the photos that are uploaded by your friends. The same things goes for a video that you share or your friends who share it with you. Also for the status updates of your friends which will be updated in your Facebook Tickers and your status updates which will be updated in theirs. But for those of you who don’t like this new ticker update from Facebook. I have got a solution to your problem an extension named Facebook Ticker Killer for the Google Chrome users only. 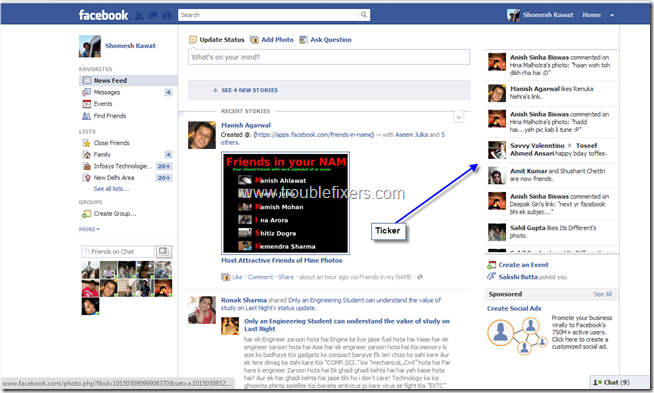 This is the Facebook webpage that will open once you will log in into your Facebook account. On the top right hand side of the webpage you will be able to see the Ticker. It has been pointed out by the blue arrow. The ticker contains all the latest updates from all your friends and families members which gets updated constantly. As any of your friend shares a photo, video, comments on a link, comments on you and status likes will be constantly updated in the ticker. But for those of you who are Google Chrome users and don’t want the Facebook Ticker then I have got an extension for you named Facebook ticker Killer.  After you will install this extension in your Google Chrome it will remove the Facebook Ticker from your Facebook login Webpage. 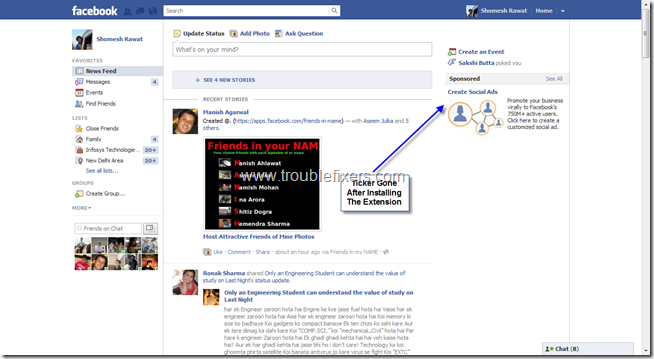 After you have installed the extension you will see that your Facebook Webpage no longer contains the ticker.