If you have been working on your system from past several hours and suddenly a message pops up that your ‘bla bla’ tool has been update and it requires a reboot of your system, please restart your computer now. Now if you have already opened around 20 WebPages on your system and working on three or four topics then it will be highly irritating to switch off your system and turn it ON again as you may not able to recall all the sources which you were using before. 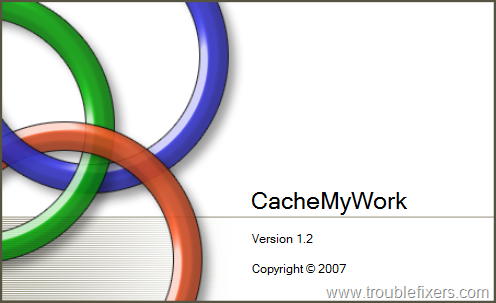 So, either you will select an option to restart your system later or you will start cursing it while rebooting it. So, I have got a tool for you named as Cache My Work, which will solve this problem for you and you will not hesitate next time while restarting your system.

Many of us, while turning down the system will opt for hibernating it rather than turning it OFF, the main reason for doing so is obvious because in case of hibernation you will not loose the applications which were currently running on your system and when you again switch ON your system, your computer will resume from the same state where it was left before. The freeware which I will be reviewing will do the same, even when you restart your system. The name of this tool tell it all, ‘Cache My work’ which means to store the work which you have been doing at the time of emergency shutting down.

Initially we reviewed about the tools like Application monitor and few more, which can automatically restart the tool which gets crashed or if your system gets crashed while you are working. 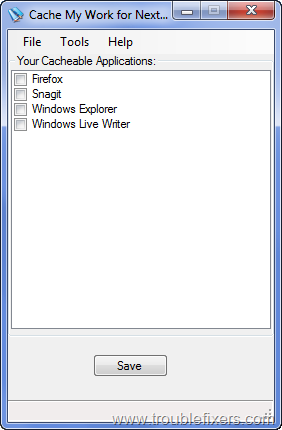 The size of the tool is very small, i.e. around 500 Kb, being light it will not take much time to get installed. After it gets installed, you will not find any shortcut on the desktop, but you ca launch it from a shortcut in the start menu. This tool is compatible with all the versions of Windows as it has been checked with Windows 7 32-bit Ultimate edition.