Now, one thing which is clear is that it should not happen as in the above image there are two google chrome icons which should be one only and all the grouping of windows should happen with only one icon. After searching about the possible reasons behind this problem – this can be due to multiple users profiles enabled or due to wrong google chrome executable pinned to taskbar or could be due to a known bug in google chrome which should be fixed soon.

There are some possible solutions to fix this problem and you can follow the steps required in the methods mentioned below.

Unpinning The Wrong Google Chrome Icon and Repining The Right One

Once you unpin the google chrome icon – the next time you open a google chrome the new window should be grouped with the existing icon which already has multiple windows grouped. 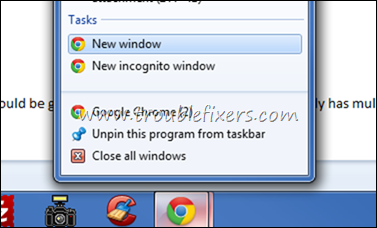 The above seems to worked for many users but not for all, however the above fix is fairly easy to apply and should work for you, if it does not then please refer the other fixes below.

One thing you should check is Right click on the original Google Chrome icon and and from the resulting list right click on Google Chrome “Properties”. What are the “Target” and “Start In” locations? if these target locations differ then this could be the root cause of your problem.

Both the path should be same as you see in the example paths to directory below.

In case they have the same directory path in both the shortcuts, then you don’t need to do anything or else you will need to remove one the icons which is inactive by following the steps defined above.

Although we don’t recommend this method as this might affect the google chrome user profile data but still if you are really annoyed by multiple icons problem, then first quit google chrome and make sure the show hidden files and folders settings should be enabled under view tab in windows explorer.

Open “My computer” click organize on the top left,and then click “folder and search options”. On the top, click the “View” tab and scroll to where it says you can check “Show hidden folders,files, and drives. click Apply, and then OK. 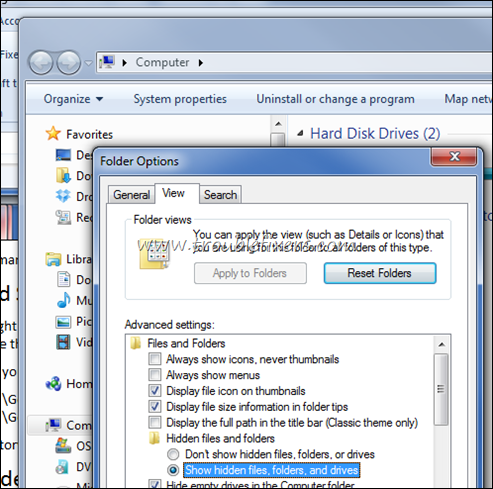 Open Start menu >> run and then type %appdata% then a new window should open up. On the tabs on the top, click “Appdata” and it should list folders. One should say “Local” ONLY. Open it, scroll down to “Google”, then scroll down to “Chrome”, and then find a folder named “UserData”. Delete “UserData”.

This way you can make one of the google chrome icon read only so that it does not show up in taskbar and there are no multiple icons when you run several instances of google chrome. For this you will need to follow the following steps one by one.

Lets us know if the above methods helped you to fix this issue or let us know if there is any other method worked in your case so that it helps others.